As current computers use ones and zeros to represent data, a technological breakthrough had emerged over 60 years ago.

This is the creation of ternary computers.

A ternary computer also known as trinary computer, is a computer that utilizes ternary logic (three possible values) instead of the long-used binary system (“Base 2”) in its calculations.

The idea of making this computer has long been existed during 1840 with the invention of an early calculating machine made entirely from wood built by Thomas Fowler and in 1958 with the first ever modern, electronic ternary computer Setun in the Soviet Union at the Moscow State University by Nikolay Brusentsov. Unfortunately, ternary computers didn’t catch on in the broader computer world.

Ternary computers through ternary computing (“Base 3”) is commonly implemented in terms of balanced ternary using the three digits −1, 0, and +1.

Balanced ternary can clearly express negative values as easily as positive ones, without the use of a leading negative sign as with decimal numbers.

Straight from the words of Thomas Fowler:

“I often reflect that had the Ternary instead of the denary Notation been adopted in the Infancy of Society, machines something like the present would long ere this have been common, as the transition from mental to mechanical calculation would have been so very obvious and simple.”

In music, a ternary form is a song form made of three sections. In mathematics, ternary means using three as a base. People would sometimes prefer ternary as trinary because it simply rhymes with binary.

As published in Jeff Connelly’s 2008 paper entitled, “Ternary Computing Testbed 3-Trit Computer Architecture.” A “trit” is the ternary equivalent of a bit. If a bit is a binary digit that can have one of two values, then a trit is a ternary digit that can have any of three values. A trit is one base-3 digit. A “tryte” would be 6 trits. Connelly (and perhaps no one else) defines a “tribble” as half a trit (or one base-27 digit) and he calls one base-9 digit a “nit.”

According to Connelly, Ternary computing deals with three discrete states, but the ternary digits themselves can be defined in different ways:

The greater efficiency ternary could provide in comparison to binary can be illustrated by the use of the SETUN computer.

As Brian Hayes, a big fan of ternary, writes: “Setun operated on numbers composed of 18 ternary digits, or trits, giving the machine a numerical range of 387,420,489. A binary computer would need 29 bits to reach this capacity ….” 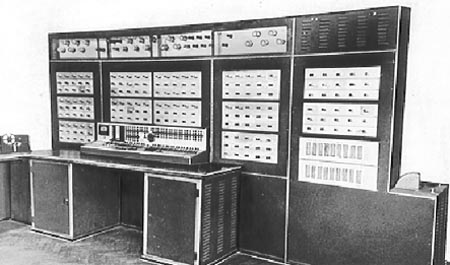 With the untimely demise of ternary computing decades ago, quite a few had expressed their views about the short-lived computing technology.

As Connelly would put it, “Trinary technology is relatively unexplored territory in the computer architecture field.” While there may be a hidden treasure of university research on the subject, not many base-3 computers have made it into production.

While researcher Earl T. Campbell states on his website, SETUN “was always a university project, not fully endorsed by the Soviet government, and viewed suspiciously by factory management.”

Why not ternary over binary?

Asking ourselves, if ternary computing is so much more efficient, then why aren’t we all using them?

The answer would be, it just happened that way.

We already come so far with binary digital computing and that would be a hard phase to turn back.

Ternary computer would just remain a history in all of us.

As Hayes would say, SETUN itself did not realize the greater efficiency of ternary. Adding that because each trit was stored in a pair of magnetic cores “the ternary advantage was squandered.” It seems that the implementation is just as important as the theory.

“Why did base 3 fail to catch on? One easy guess is that reliable three-state devices just didn’t exist or were too hard to develop. And once binary technology became established, the tremendous investment in methods for fabricating binary chips would have overwhelmed any small theoretical advantage of other bases.”

Ternary Computers in the FUTURE

Though we can never turn back with ternary computers, its technology (ternary computing) still has a potential to be used in complementary with some of today’s emerging technologies.

Donald Knuth argues that they will be brought back into development in the future to take advantage of ternary logic’s elegance and efficiency.

One possible way this could happen is by combining an optical computer with the ternary logic system.

Another one is the Josephson junction , proposed as a balanced ternary memory cell, utilizing circulating superconducting currents, either clockwise, counterclockwise, or off.

Wayback 2009, a quantum computer was proposed which uses a quantum ternary state, a qutrit, rather than the typical qubit.

Though these kind of computers may not exist, its computing technology (ternary) could be used with today’s emerging technological inventions.