Recently I have been sucked into the world of Monopoly. It is certainly a great game that teaches you about cash buffer and strategic thinking.

By playing for a while, I gain experiences and notice certain things that may help a player increases his or her chances to win. Crossing references with some articles on the internet, I decided to write down what I learned after spending quite a bit of time playing and “researching”.

If you want to buy the game, you can buy it here.

There are multiple tricks that you can utilize to make you the winner easier than other players who don’t know how to play systematically. Some of them includes: 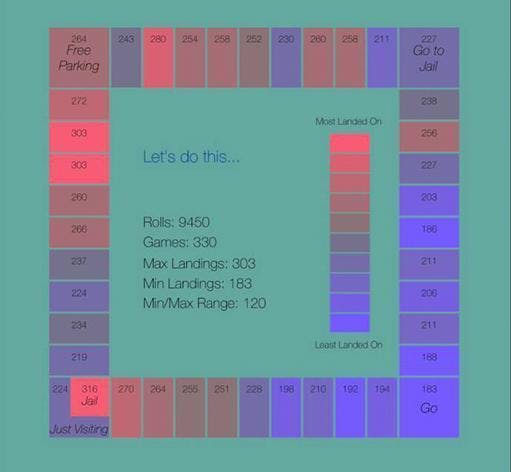 The image above is the heat map of a monopoly board. We can easily see that there is a significant landing rate around Free Parking area. And guess what streets are around that place? Orange and red streets!

There are 2 reasons why this happens.

As a conclusion, if you can, try to buy all the orange ones.

Stay in jail for as long as possible in late game

When players start building buildings and/or hotels, it’s not a bad idea to stay in jail for as long as you can, which are 3 turns. Unless you are unlucky enough to roll a double. This brings you 2 benefits:

Note that this only benefits you in middle-late game. In the early game, if you’re unlucky and land on jail tile, just pay $100 to get out of it. Your goal is to accumulate as many properties as you can at the beginning of the game. This gets you leverage to negotiate with other players later on. 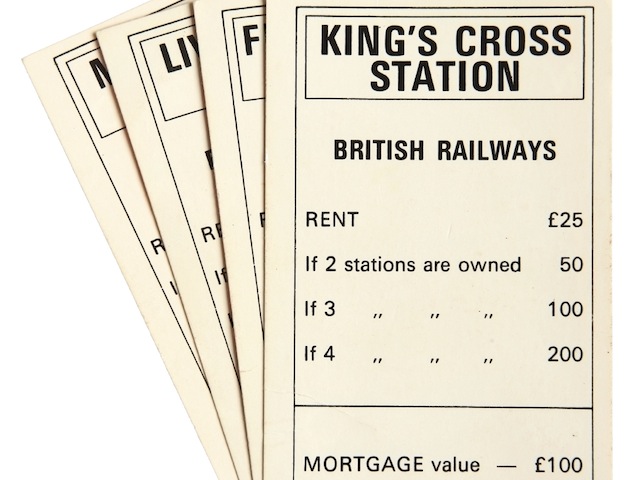 Looking at the heat map above, Station tiles have a higher visiting chance than its adjacent tiles. And owning multiple station tiles increases the fee that someone needs to pay you if they land on the station. As a result, it’s a good investment if you can buy the stations early on.

But Utilities are not!!!

According to the heatmap, Electricity and Water tiles are not as attractive as it might seem. There are only 3% chance that a player lands on the tiles in a full game of 6 players. And what does it return? Considering you own both utilities, your income ranges from $20 to $120, which is a very wide range of unstable income.

At least, don’t buy utilities at the full price. Let’s just throw an auction to drain other people’s cash reserves.

In Monopoly, there are multiple “incidents” where you need to spend your money on. From paying taxes to a random tax assessment, from paying for other player’s birthday, to paying fees to doctors. It is in your best interest to keep a good money in reserves for these situations. Somewhere around $100 should be enough. In the early game, auctions can really help you deplete other player’s bank account. If you land on a tile that you don’t want to own at that point, consider putting it up for auction. This will help you spy on other player’s strategy, as well as make them spend on something that they haven’t accounted for.

E.g. Pall Mall street has the tag price of $140. If you don’t want to buy it at the price as is, you can put it up for auction. There are only a few outcomes:

If you have the highest amount of cash in the game, ALWAYS putting an empty property for auction, since it’s much easier to get it under tag price in that situation.

Monopoly is a great game that simplify the Real Estate business down to simple rules. You can play this game virtually anywhere with the game on the App Store, or playing with friends. This game can potentially eat up a lot of time, so consider playing it with housemates, or have a room to preserve the state of the game so you can continue on the game later on.

I believe that if you are a property investor, monopoly is a game that you should have in your house. With that being said, I found an affordable version of the game on Amazon.