As the present day’s cyber technology innovation is improving, the threat landscape widens as well.

Several years ago, hackers and malware have shut down nuclear centrifuges in Iran and severely damaged an unnamed steel mill in Germany.

Knowing the advancements we have today, could such incidences be possible enough?

As headlined on an article from a fictional Weekly World News in 2000, reporting that “hackers can now turn your home computer into a bomb and blow your family to smithereens, and do so remotely from thousands of miles away,” it’s quite impossible to happen in reality. 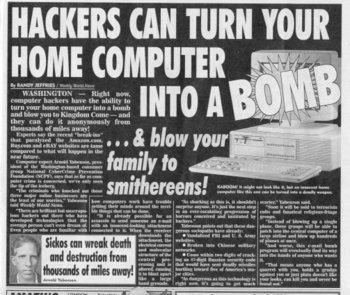 It’s a yes and a no, theoretically and hypothetically, in fact, such conditions like this are somewhat unrealistic in most machines today.

Considering your definition of damage, it might be possible in some EXTREMES:

Obviously, you need a lot of time to damage your computer.

Upon answering the question about the software harming your hardware, it’s a battle between a YES and a NO.

As all hardware is driven by software, it is technically possible to destroy your hardware or at least make it inoperable by messing with software. Think about overclocking, wherein, you’re doing changing settings in the BIOS, allowing low access to low level settings. Mess up and voila! Your hardware is gone. Also, there are viruses that could potentially take advantage and would possibly disrupt and destroy your hardware since the system can be modified.

No, in the sense that, software is nothing but a flow of electricity that’s why it cannot damage hardware by itself.

Lastly, a software can damage another software in the hardware that makes it work, but this doesn’t essentially break the hardware.

Is it TRUE that software can damage your hardware? How would that even be possible?

There’s quite a few instances wherein you can definitely say that software can “potentially” harm your hardware.

A BIOS Flash.Some motherboards allow you to flash (modify) the BIOS via software from within the OS. Eventually, this opens a backdoor for malware to flash the BIOS to something that will damage the processor.

Overclocking tools. Another one, some motherboards provide overclocking tools, allowing you to change CPU settings from within the OS. Same as the first situation, once a virus takes over that, putting your CPU’s settings to the extreme then BOOM!

Stress-tests and intensive applications. Over-exerting your CPU to its limits could spike temperatures, which can eventually damage it. Of course, the fan in your computers help cool the CPU down, and most CPUs are designed to shut off when they reach a dangerously high temperatures (thermal shutdown).

In such cases, if an attack is possible even in theory, CrowdStrike, a security vendor says YES.

“We can actually set the machine on fire,” said Dmitri Alperovitch, CrowdStrike CTO in a statement.

The exploit requires completely replacing the Mac’s firmware, which controls every aspect of the hardware.

This means that you need to offer a fake Mac firmware update, convincing the user to install it.

A software can potentially damage a hardware unless it’s malicious but for legit software it’s too impossible to happen.

For the German steel mill incident, someone found a way to control the plant’s equipment, preventing people on site from shutting down a blast furnace.

As with Stuxnet, the one about nuclear centrifuges, it didn’t destroy computers – it exploited computers attached to centrifuges, and destroyed them.

It is unlikely to happen that viruses will destroy your computer, but hackers might someday go after the objects connected to it.