Optical data storage as what Britannica would define it is an “electronic storage medium that uses low-power laser beams to record and retrieve digital (binary) data.”

With optical storage technology, it uses lasers to write to, and read from, small discs that contain a light-sensitive layer upon which data can be stored. 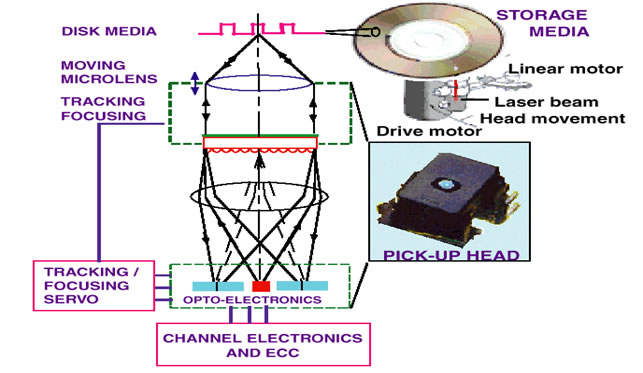 Optical storage systems usually consist of a drive unit and a storage medium in a rotating disc form. The discs, in general, are pre-formatted using grooves and lands (tracks), enabling the positioning of an optical pick-up and recording head to access the information on the disc.

Compare to other storage formats, optical data storage discs are small, portable, and do not easily wear out with continual use, making them particularly useful for storing data.

The first method for storing data using light on a hard medium was invented by James T. Russell in the late 1960s, after realizing that the wear and tear on the vinyl records caused by continuous contact from the stylus to the record, can be avoided by using a light to read a music without physically touching the disc. Then on, it had grown to a lot of developments.

Today’s conventional optical storage is currently in 2-dimensional medium,i.e. CD-ROM, DVD, Blu-Ray, etc. While these devices have steadily improved in storage capacity, they are still considered limited knowing the fact that data can be written in layers on the disc.

This storage system may use a disc that looks nearly same like a transparent DVD, containing 100 layers of information to be stored on a single disc– each at a different depth in media and each consisting of a DVD-like spiral track.

The average thickness of this upcoming version of disc is predicted to be 5 millimeters. So expect to have thicker discs than today’s ordinary CDs and DVDs.

What is 3D optical data storage?

A cross-section of a 3D optical disc (yellow) along a data track (orange marks).

The origins of this storage system dates back to the 1950’s, when Yehuda Hirshberg developed the photochromicspiropyrans and suggested their use in data storage.

In the 1970s, Valeri Barachevskii demonstrated that this photochromism could be produced by two-photon excitation and eventually in the late 1980s, Peter T. Rentzepis showed that this could lead to three-dimensional data storage.

3D optical data storage has the potential to provide petabyte-level (1024 TB) mass storage on DVD-sized discs, using a technology that allows more than 100 layers to be written on a disc that looks like a traditional DVD. Thus, creating an exponentially larger data.

Estimates suggest that 3D optical data storage discs can be able to store 5 terabytes of data or more.

There are two (2) major types of 3D storage:

Localized-bit. An extension of standard disc storage, localized-bit allows data to be available not just on the surface of the disc but also, throughout its volume. The laser then reads the data through the medium, rather than across the lands and pits of a traditional CD-ROM or DVD.

Holographic Data Storage. Though the above method is viable, holographic data storage has a much greater storage and retrieval potential – much possible and has better opportunities for implementation.

It is a three-dimensional image created as light beams (e.g., from a laser) merge together. Usually, a laser beam is split into two paths: data and reference beams are directed into the storage medium such as a crystal.

Optical storage varies from other data storage techniques that make use of other technologies such as magnetism or semiconductors.

The downsides can be:

Although several companies are actively developing the technology and claiming that it may become available soon, still no commercial product based on 3D optical data storage has yet arrived due to design issues that need to be addressed.