The next-generation wireless technology faster than 802.11ac (now known as Wi-Fi 5), Wi-Fi 6 or “802.11ax” or “AX WiFi”will be the newest version of the 802.11 standard for wireless network transmissions that we commonly call Wi-Fi.

It was developed by the Institute of Electrical and Electronics Engineers (IEEE) which is known to be the world’s largest association of technical professionals. The IEEE is basically the keeper of Wi-Fi, incorporated with committees responsible for developing it and establishing industry standards.

Wi-Fi 6 isn’t a new means of internet connectivity but rather an upgraded standard that compatible devices, particularly routers.

Meanwhile, some tech vendors are now introducing their Wi-Fi 6 compliant devices in the market. The Samsung’s Galaxy S10 was the first phone to support Wi-Fi 6, and the new iPhone 11 series from Apple. So expect to have labels identified with a WiFi signal indicator coupled with numeric representation of the connection in this case the number 6 on the packaging of some of the upcoming devices soon.

Note: The Wi-Fi Alliance has switched to version numbers away from the confusing and less memorable IEEE 802.11 standards.They won’t start offering Wi-Fi 6 certification for devices until the third quarter of 2019.

Wi-Fi 6 is the next generation standard in Wi-Fi technology. It was previously known as 802.11ax until the Wi-Fi Alliance decided to rename it more succinctly. This latest Wi-Fi standard offers faster data transfer speeds having 40% higher compared to Wi-Fi 5, through more efficient data encoding. Thus, resulting in higher throughput. 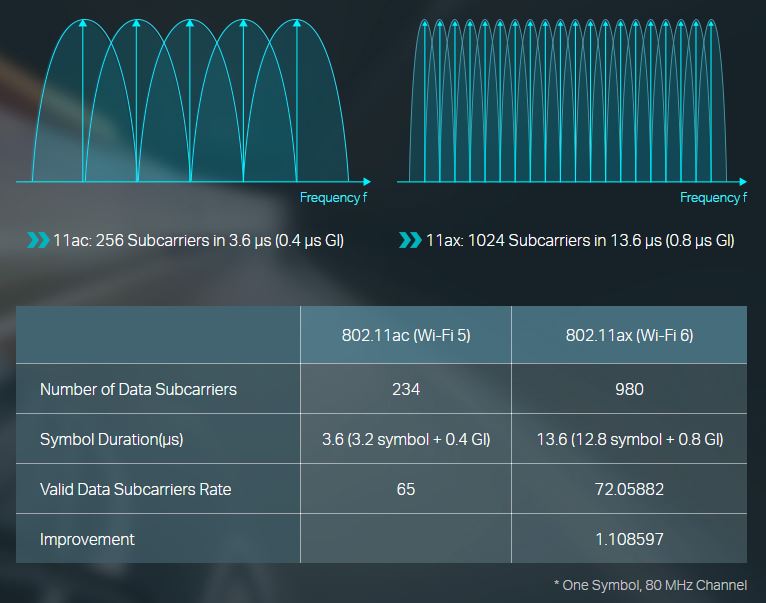 Having today’s Wi-Fi 5 wireless standard, the new Wi-Fi 6 major upgrade is not just a change of routers but also a change of device and Wi-Fi connectivity in general.

Let’s see how this wonderful Wi-Fi standard upgrade could change our daily lives.

OFDMA. For increased efficiency, the Wi-Fi 6 standard supports OFDMA or the Orthogonal Frequency Division Multiple Access. It is a way of dividing a wireless channel into a large number of sub channels. Through these smaller channels, multiple devices can connect to the access point or router all at the same time without waiting for one device to finish first.

With OFDMA, each channel is chopped up into hundreds of smaller sub-channels, each with a different frequency. The signals are then turned orthogonally (at right angles) so they can be stacked on top of each other and de-multiplexed. With the bank analogy, imagine a teller being able to handle multiple customers when they are free. So customer one hands the teller a check and while that person is signing the check, the teller deals with the next customer, etc. The use of OFDMA means up to 30 clients can share each channel instead of having to take turns broadcasting and listening on each. ~ Network world

MU-MIMO. Also supporting the improved version of MU-MIMO, WiFi 6 antenna can transmit and receive from multiple other WiFi 6 devices concurrently. This allows a larger amount of data to be transferred at once and enables access points (APs) to handle larger numbers of devices simultaneously.

Target Wake Time (TWT). The access points of Wi-Fi 6 will be much smarter about scheduling whenever devices wake up and request information. This greatly helps devices to avoid interfering with each other, which, in turn, allowing them to spend more time in their battery-saving sleep modes.

Longer Battery Life. With TWT, your smartphones, laptops, and other Wi-Fi-enabled devices should have longer battery life, as well.

When the access point is talking to your smartphone, it can tell the device exactly when to put its Wi-Fi radio to sleep and exactly when to wake it up to receive the next transmission. This will be a great benefit for low-power “Internet of Things” devices that connect via Wi-Fi.

Whether you are at the crowded stadium, airport, hotel, office, apartment, or in the comforts of your home with everyone connected to Wi-Fi, the new Wi-Fi 6 technology (as addressed byIntel), will improve each user’s average speed by “at least 4 times” in congested areas with a lot of connected devices.

So no chances of getting slow Wi-Fi.